Initial estimates of the deficit can be revised significantly over subsequent months as more reliable data become available. This box set out how our forecasts during 2016 and 2017 evolved and how the outturns for 2016-17 were revised over time.

This box is based on ONS data from September 2017 .

The September 2017 estimate of PSNB in 2016-17 is £45.0 billion. That is £7.0 billion lower than the initial ONS estimate published in April and between £6.7 and £23.1 billion lower than our three most recent forecasts. Chart A sets out how the public finances data and our forecasts for 2016-17 evolved in the period after our March 2016 forecast was presented: 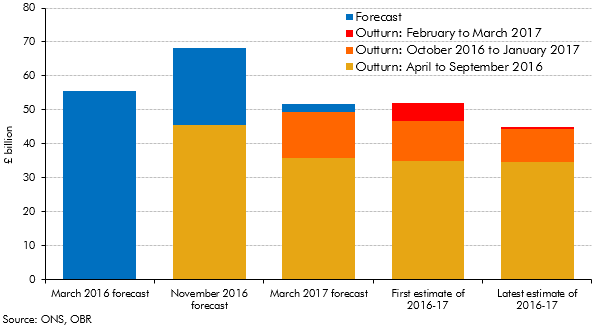 Table A sets out the drivers of the difference between our March 2017 forecast for 2016-17, the first ONS estimate released in April and the latest estimate (which will remain subject to revision for some time). In this table we have adjusted our forecast up by £0.3 billion to account for the effect of ONS classification changes that affect the recording of several small items of receipts and spending. These have been announced (so we include them in our forecasts) but not implemented (so they are not yet included in the outturn data).

On this basis, the difference between our March forecast and the initial estimate was just £5 million. That reflected a number of offsetting factors, including higher local authority borrowing but also higher income tax and NICs receipts and lower departmental spending.

Between April and September, the ONS revised PSNB in 2016-17 down by £7.0 billion. Methodological and classification changes implemented in the September data release explain £1.3 billion of the revision (the bulk relating to public sector pension schemes). The remaining £5.7 billion revision has been broad-based, with central government receipts revised up, central government spending revised down and local authority borrowing also lower. Only public corporations’ borrowing – revised up £0.1 billion since April – has had an offsetting effect.

Relative to our March forecast, Table A shows that on the basis of the latest estimates:

Partly offsetting those factors, local authority net borrowing was £1.8 billion higher than expected, as spending exceeded local revenue by a greater extent than we had assumed, mainly through higher than expected use of prudential borrowing. The implications of this for future years are not yet clear. This box was originally published in Forecast evaluation report – October 2017