Coronavirus scenarios and analysis
Alongside the FSR 2020 we have updated the monthly profiles for 2020-21 consistent with the central scenario, and the policy monitoring database which includes Summer Economic Update announcements.

The coronavirus outbreak and the public health measures taken to contain it have delivered one of the largest ever shocks to the UK economy and public finances. In the Fiscal sustainability report, our three medium-term scenarios (upside, central and downside) see the largest decline in annual GDP for 300 years this year, accompanied by an unprecedented peacetime rise in the budget deficit to between 13 and 21 per cent of GDP, and debt rising above 100 per cent of GDP in all but the upside scenario. The pandemic has worsened the baseline against which existing long-term pressures on fiscal sustainability will be felt, and has materially altered our assessment of future fiscal risks.

Richard Hughes confirmed as the next Chair of the OBR

In June, the Chancellor nominated Richard Hughes as the next Chair of the Office for Budget Responsibility when Robert Chote ends his final term in October. The Treasury Select Committee has now confirmed the appointment.

Find out more on the Treasury Select Committee’s website.

The announcements made on 8 July were made too late for us to incorporate in the Fiscal sustainability report’s analysis but we have made an initial assessment of the fiscal and economic impacts in our press notice.

Robert Chote thanks the OBR's staff, alumni, contributors and stakeholders on its 10th anniversary

The budget deficit continues to rise sharply. Three months into the 2020-21 fiscal year, tax payments received by HMRC are down by 35 per cent on last year, while central government spending is up 40 per cent. But year-to-date borrowing is lower than assumed in the central scenario from our Fiscal sustainability report. That reflects lower departmental spending and loan guarantee write-off costs that are not yet incorporated in the outturn data, as well as surprisingly strong June tax receipts. The depth and breadth of the economic and fiscal analysis published by the OBR “can be considered as best-practice, and could be used as a benchmark by other advanced countries”, according to the International Monetary Fund’s Fiscal Transparency Evaluation for the UK. “While it is still relatively early in its track record, the OBR’s forecasting record indicates a lower degree of bias than under the Treasury forecasting regime.” 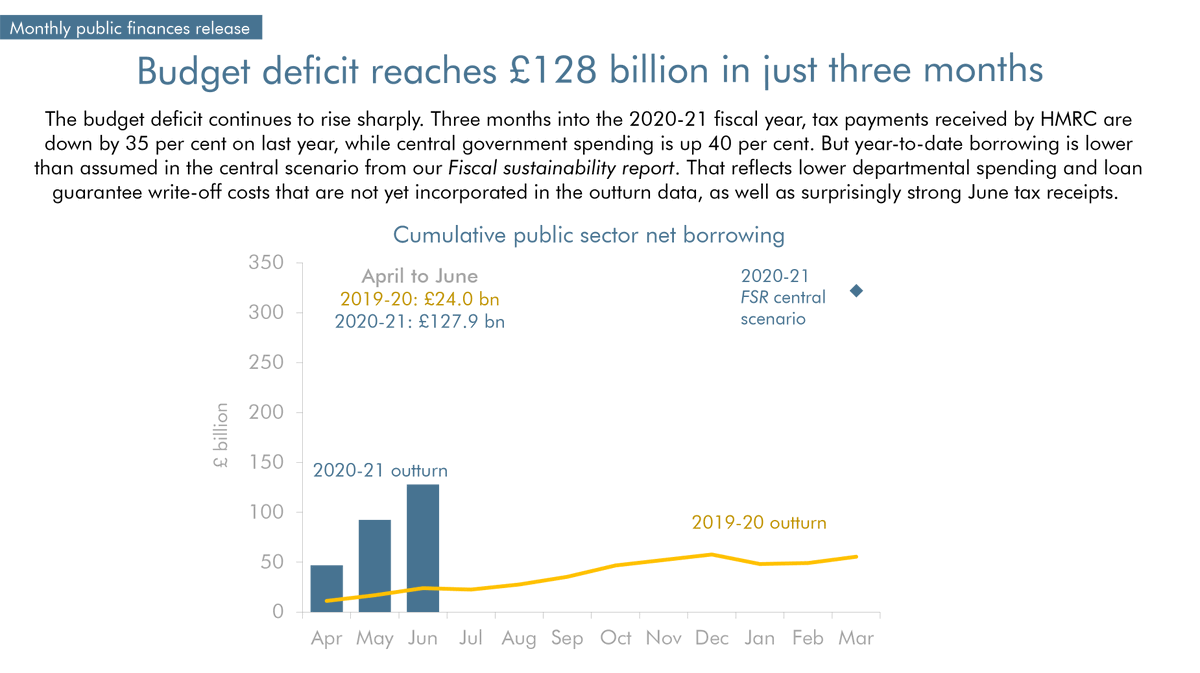 @OBR_UK
3 weeks ago
In case you missed it, Robert Chote's presentation on the #OBRFSR2020 can now be watched on our YouTube channel 🎦

The Office for Budget Responsibility:

Read more about us