The Government announced plans for a new 'points based' immigration system set to come into place in 2021 that will align migration policy for EU and non-EU migrants. In this box, we considered the impacts of this new system on the outlook for potential output growth.

In February, the Government announced its intention to introduce a ‘points-based’ migration system from January 2021 that will align migration policy for EU and non-EU migrants. The new regime requires migrants to speak English, have a job offer from an approved sponsor, and meet skills and salary thresholds. Tier 2 General applicants will need to earn the higher of the 25th percentile of their occupation’s wage distribution or £25,600 – slightly below the £30,000 specified in the Government’s December 2018 White Paper. Potential migrants will also be able to trade a salary lower than the going rate against characteristics such as their qualifications.

In its latest report,a the Migration Advisory Committee modelled the impacts on migration of a counterfactual scenario in which the UK was assumed to have adopted in 2004 the more restrictive regime outlined in the Government’s earlier White Paper (which proposed a salary threshold of £30,000). This counterfactual was then compared with actual migration flows to get a sense of the impacts by 2016-18. It concluded that cumulative EEA migration would have been 70 per cent lower, with the overall population 3.2 per cent smaller, employment 4.0 per cent lower, GDP per worker 1.3 per cent higher and therefore overall output 2.8 per cent lower.

Our March 2019 forecast was based on the ONS’s ‘principal’ population projection for net migration to decline to 165,000 a year in 2023. Last October, the ONS revised up the level of net migration in the ‘principal’ projection to settle at 190,000 in 2025, which we incorporated in our pre-measures forecast. To reflect the more restrictive regime, in our post-measures forecast we have switched to the ‘zero net EU migration’ variant, in which net migration flows fall to 129,000. The profile for this variant strikes us as a reasonable depiction of how net inward migration might evolve as a result of introducing the new migration regime, though that does not imply that our central expectation of net EU migration itself is exactly zero. Indeed, we would expect falls in net migration from the EU to be partly offset by increases in net migration from those outside the EU. Recent years suggest an offset of around half might be expected. Uncertainty around migration projections is always large,b with the change in migration regime only adding to this uncertainty. 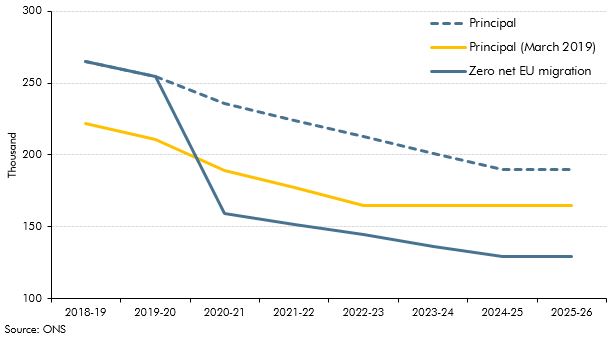 These changes reduce the expected size of the population and, alongside a small fall in the participation rate, reduce total participation by 0.4 per cent at the forecast horizon. We assume no effect on equilibrium unemployment, so the full effect feeds through into lower employment.

The productivity impact is more difficult to judge. The salary threshold imposed on new migrants will, arithmetically, lead to a ‘batting average’ effect as some low wage – and therefore in most cases also low productivity – workers will no longer be able to enter the country, thereby raising average productivity relative to the current regime. Based on the available evidence, we assume this increases potential output per worker by 0.1 per cent – broadly offsetting the fall in the participation rate and around a quarter of the total employment effect.c