The vote to leave the EU had caused in a a slowdown in real GDP growth in the UK, with the main driver being weak investment growth. This box compared UK growth and investment since the referendum to that in the other major advanced countries in the G7.

This box is based on OECD data from November 2018 .

UK real GDP has grown slightly faster than we expected in our initial post-referendum forecast in November 2016. This has meant that, within the G7, growth in the UK has been only slightly weaker than that in Germany and France and has actually outpaced that in Japan and Italy (Chart C). But UK growth has slowed since the vote, and has been much weaker than anticipated in our final pre-referendum forecast in March 2016 and growth in the US and Canada. 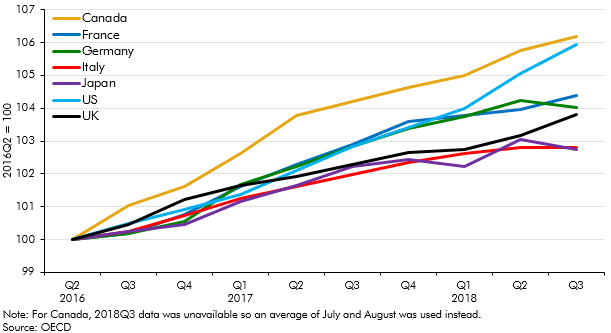 The main drag on UK GDP growth since the referendum has been non-dwellings investment – a key driver of future productivity growth.a It has grown by less than 2 per cent in the UK in the nine quarters since the EU referendum, compared to over 6 per cent in every other G7 economy (Chart D). In the nine quarters prior to the referendum, non-dwellings investment in the UK grew in line with the rest of the G7, with the total increase of 4.0 per cent, similar to the 3.9 per cent average in the rest of the G7 (excluding Canada where mining investment fell sharply as a result of the large drop in energy prices).

While it is difficult to know what portion of the recent underperformance of investment versus the rest of the G7 is due to the referendum result, Bank of England analysis of its Decision Markers Panel Survey suggests that nominal business investment growth has been 3 to 4 percentage points weaker than it otherwise would have been, specifically as a result of Brexit – due to both the expected effect of Brexit on future sales and the uncertainty created by the referendum result. Given the effect of the fall in the pound on the price of investment goods, the Bank’s analysis suggests that the effect on real investment would be greater than on nominal investment.b The weakness in non-dwellings investment in the UK means that it has fallen as a share of GDP since the referendum, which is unusual at this stage of the economic cycle with apparently little spare capacity left in the economy. Other factors would also appear to make for a friendly investment environment, including low interest rates and improvements in exporter profitability due to the recent strength in the global economy and the fall in the pound. Recent IMF analysis estimates that, since the EU referendum, business investment has grown by 5.5 percentage points less than would be expected given these fundamental economic factors.c

b Bank of England, Agents’ summary of business conditions and results from the Decision Maker Panel Survey, 2018Q2.