Revisions to National Accounts data are a normal part of the Blue Book process, which reconciles the different measures of GDP and incorporates information from annual data sources, such as the Annual Business Survey and HMRC tax data. However, even after all data sources have been incorporated, methodological changes can mean further (and sometimes even larger) revisions years later.

Looking at revisions to estimates of GDP in the early 1990s is instructive. Chart A shows the profile of the 1990s recession and recovery as recorded in the 1991 Blue Book, the two subsequent Blue Books, and in the 2011 Blue Book. The 1992 Blue Book suggested that the economy shrank by 4.3 per cent from peak to trough and that there was a pronounced ‘double dip’ recession after a brief recovery at the end of 1991. In contrast, the latest vintage of data shows a much smaller peak-to-trough decline of 2.5 per cent and no apparent double dip. 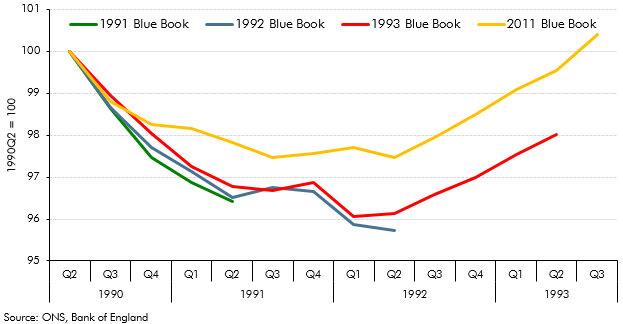 Register for the Economic and fiscal outlook press briefing

The Chairman’s presentation on our third Fiscal risks report

Tax revenues from the financial sector
Impact of interest rates on the public finances
This website uses cookies to improve your experience. We'll assume you're ok with this, but you can opt-out if you wish. Read MoreCookie settingsRejectAccept
Cookie Policy