This box is based on HMRC fuel duty data from October 2016 .

Our fuel duty receipts forecast combines our underlying forecast assumptions about the amount of fuel that will be purchased and the Government’s stated policies on the fuel duty rates that will be levied on those purchases. Parliament has stipulated that our forecasts be based on those stated policies and that we must not consider alternatives. But it also requires us to note risks to our forecast. The possibility that the actual path of fuel duty rates policy will differ from the Government’s current stated policy is a risk that we consider worth noting.

As Chart B shows, fuel duty policy has been changed at most Budgets and Autumn Statements since 2010. Specifically: 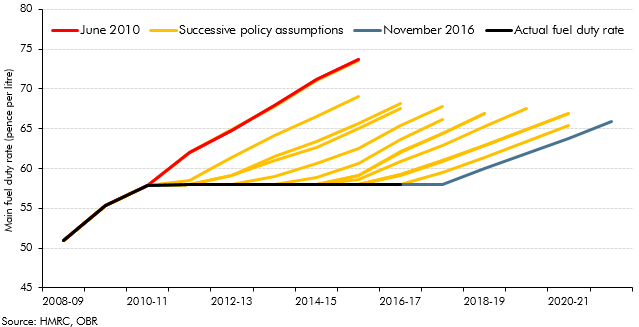