Take-up of child benefit had been declining since 2012-13, but this downwards trend accelerated at the onset of the Covid pandemic in March 2020, which resulted in a steep decline in take-up over the subsequent 18 months. In this box, we considered the main drivers of the child benefit caseload and the effect the pandemic had on each of them. We set out the reasons why the pandemic contributed to lower take-up, and then considered the medium-term impact of the pandemic-driven drop in take-up on our forecast.

There are two main drivers of the child benefit caseload:a new claims, which are mainly driven by births, and the high-income child benefit charge (HICBC), which effectively tapers away child benefit for individuals with income between £50,000 and £60,000, thresholds that have been held flat in cash terms since the HICBC’s introduction in 2012-13. Before the pandemic, the child benefit caseload had been falling steadily as a result of both drivers: take-up had been falling since the introduction of HICBC as income growth meant more individuals faced the charge, while the eligible population was also falling due to fewer births (see Chapter 2).

The child benefit caseload fell from over 7.9 million in 2012-13 to below 7.3 million in 2019-20. The pandemic resulted in a further fall in the number of new child benefit claims (measured by the number of 0-year-olds for which child benefit is paid each month). They fell by 13 per cent between February 2020 and June 2021 (including backdated claims) – a fall of around 70,000 in the new-claims caseload. While this was partly due to a 4 per cent drop in the number of births in 2020, the majority was due to the take-up rate for 0-year-olds falling from 78 per cent in February 2020 to a low of 71 per cent in June 2021, before recovering back towards the pre-pandemic downward trend (Chart A). 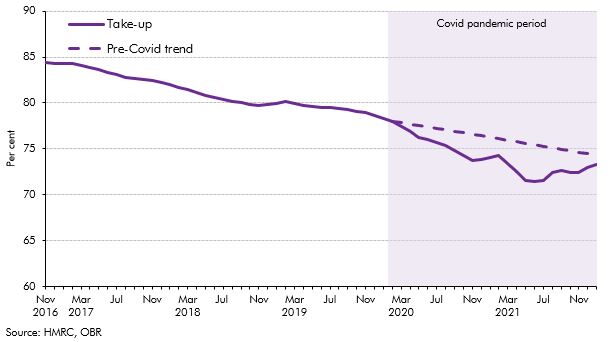 There are two main (and many smaller) ways that the pandemic may have affected take-up:

The medium-term implications of lower take-up during the pandemic depend on the extent to which these ‘missing’ claims are recovered in the future. Our forecast assumes that only half of the 0-year-olds who were not registered for child benefit in 2020-21 and 2021-22 will be registered by 2026-27. As a result, we expect the child benefit caseload to be 29,000 lower in 2022-23 and 17,000 lower in 2026-27 than it would have been without the pandemic (holding all other drivers of the caseload constant). This amounts to a modest reduction in spending of £33 million in 2022-23, falling back to £22 million in 2026-27.

This box was originally published in Welfare trends report – May 2022